Practicing power “with” children vs. power “over” children can be more of a shift in 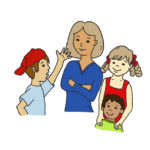 thinking for adults than actually giving up punishment.  We often think it is more about what we do “to” children to make them change their ways (the power over thing again)!

Implementing some “power with” kids is good next step.  Any way that you can involve children in creating routines, problem solving, etc. brings about a shift that invites more cooperation and creates more accountability.

Use Routine Charts to Increase Cooperation and Accountability

One way to practice “power with” children when it comes to routines is to create routine charts WITH them. For example for bedtime routines – sit down and brainstorm all the things that need to be done to get ready for bed i.e. jammies, teeth, etc.

Then take pictures of the child while they are doing each of the routines and post the pictures on a chart of some sort – doesn’t have to be fancy but needs to reflect the child’s participation in it. Even small children can glue and stick the pictures on.

This is very different from you creating the chart for them and imposing each of the steps.  When the child has had a part in the creation of the chart, it has more meaning.

The rules are no longer “your” rules but become “their” rules  because they have had a part in creating them.  The chart becomes an “agreement” and in a sense becomes the boss – rather than you!

This same idea can be used for morning routines or any other routine in which you want to increase the child’s independence.

Next: Problem Solving WITH Children.